«My choice is military medical service!»

Educational and methodical materials for classes

Teachers about their military service 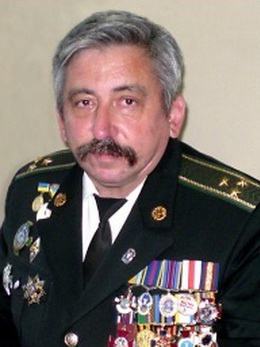 After graduating from Belovodsk Secondary School in 1980, Sklyar Serhiy Ivanovych entered the 1st year of the SM Kirov Military Medical Academy in Leningrad. He studied at the faculty of training doctors for the Land and Missile Forces. He graduated from the full course of the academy in 1986 with a degree in medicine. Upon graduation, he was awarded the military rank of lieutenant of the medical service and was sent to serve in the Turkestan military district.

From 1986 to 1988 he served as chief of the medical service of a separate training reconnaissance battalion (Ashgabat). Gained experience in organizing medical support of training and combat training of military training units in a dry hot climate. After specialization in therapy at the 73rd Military Internship (Tashkent), he qualified as a physician.

From 1988 to 1990 he served as a senior resident of the therapeutic department, and from 1990 to 1993 head of the outpatient department of the garrison military hospital (Nukus). According to the specifics of the hospital, he received training as a toxicologist.

In 1993 he was transferred from the Army of Uzbekistan (in which he was automatically enrolled in 1992 since the end of the USSR) to the Armed Forces of Ukraine. During 1993 he served as an intern in the therapeutic department of the garrison military hospital (Lebedyn).

After the disbandment of the hospital in late 1993, he entered the postgraduate course at the Department of Military Therapy of the Military Medical Department at the Ukrainian State Medical University named after OO Bogomolets (Kyiv). During his postgraduate studies he defended his dissertation devoted to the study of the effect of small doses of ionizing radiation on the course of diseases of the digestive system in 1986 in the Specialized Council of NMU named after OO Bogomolets under the guidance of Corresponding Member of the Academy of Medical Sciences, Professor Amosova KM

From 1996 to 2002 he successively held the positions of teacher, senior lecturer, associate professor and deputy head of the Department of Military Therapy of the Ukrainian Military Medical Academy (Kyiv). He dealt with military therapy, military clinical toxicology and radiology, is a co-author of relevant textbooks for military physicians.

In 2002 he was appointed head of the newly established Department of Military General Practice - Family Medicine of the Ukrainian Military Medical Academy (Kyiv). He headed the training of military doctors for the military unit of the medical service of the Armed Forces of Ukraine. He received the academic title of associate professor.

In 2003, by order of the Minister of Defense of Ukraine, he was awarded the military rank of colonel of the medical service.

In April 2013, he retired from the reserve for years of service and was granted the status of a Veteran of the Armed Forces of Ukraine. He was awarded by the Ministry of Defense, the Ministry of Education and Science, the Ministry of Internal Affairs, the Commander of the Internal Troops, the State Border Guard Service, the State Service for Special Communications and Transport, and a number of public organizations.